I stumbled upon Valiant Budi’s Twitter feed (@vabyo) thanks to a recommendation from another Indonesian writer who mentioned that his stories from Saudi Arabia were the funniest serial tweets she had ever read. Too many Indonesians abuse Twitter to give lectures (so called kultwit, or kuliah twitter) to their followers, but when he was working abroad @vabyo mastered the form to tell wildly hilarious stories under the banner of Arabia Underkampret (a pun—plesetan—of Arabia Undercover), about Indonesians living and working in the Kingdom. Every two days or so, another installment of @vabyo’s Arabian Underkampret would unfold in a series of 140 character length “chapters” over the course of about an hour. In real life, Valiant Budi was working as a barista at an international coffeeshop in the city of Dammam. With self-effacing humor and linguistic wit, @vabyo’s stories on Twitter described Saudi society as seen through the eyes of foreign workers from Indonesia. 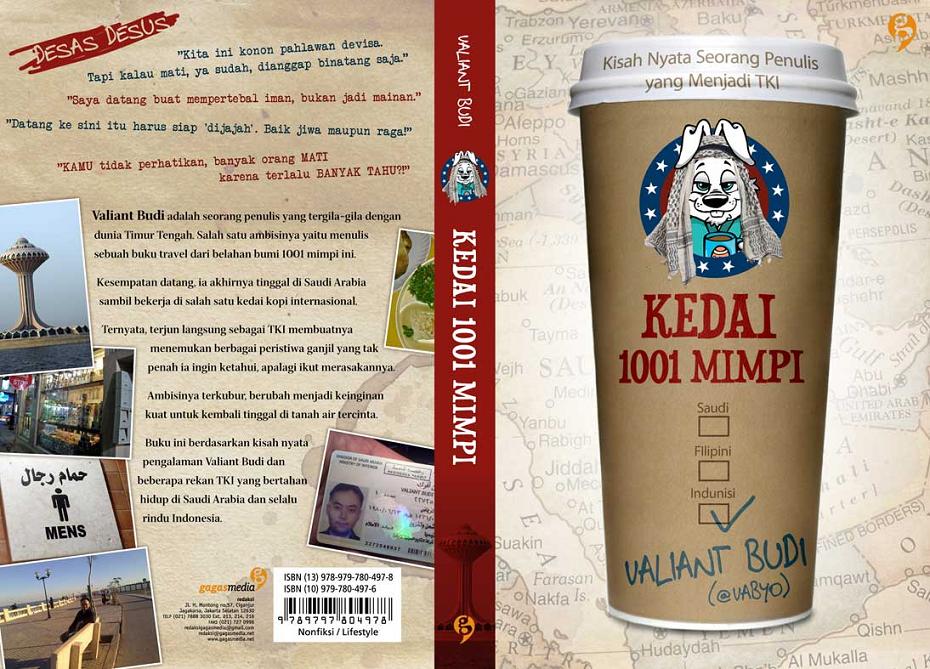 Book cover for Valiant Budi's "Kedai 1001 Mimpi" (front and back) Upon his return to Indonesia last year, Valiant wrote a travel memoir based in large part on the stories he already told on Twitter, his personal blog, or facebook. My signed (and kissed!) copy of Kedai 1001 Mimpi: Kisah Nyata Seorang Penulis yang Menjadi TKI arrived in the mail at the beginning of May. I haven’t settled on a fair translation of the title, but for now I’m going with the utilitarian but decidedly less catchy “Shop of 1001 Dreams: The True Story of an Indonesian Writer who Worked Abroad.” Each chapter recounts a series of short vignettes, partly reflecting its Twitter origins, making the book easy to pick up at a free moment and read quickly. I don’t think I could do Valiant any justice by recounting his experiences in detail, but there is plenty of shock and outrage, leavened with enough wordplay and humor to highlight Valiant’s absurd circumstances in the Saudi Kingdom

The parts of the book that I consistently enjoyed were Valiant’s “translation” moments. Throughout the book, Valiant interacts with Saudis (of course), Filipinos, Indians, Americans, and several fellow Indonesians. Among non-Indonesians, Valiant is probably speaking English as he mentions several times that he only learned how to say a few work-related coffeeshop words and curse words in Arabic. He must always translate these interactions for his Indonesian readers, or translate Indonesian for his foreign interlocutors in Dammam. Here is what Walter Benjamin says about how signifiers relate to the signified in translation:

“While content and language form a certain unity in the original, like a fruit and its skin, the language of the translation envelops its content like a royal robe with ample folds. For it signifies a more exalted lan­guage than its own and thus remains unsuited to its content, overpowering and alien. This disjunction prevents translation and at the same time makes it superfluous.” [from “Task of the Translator.” Emphasis mine on those awesome metaphors.]

The “ample folds,” the yawning gaps between language and content, “overpowering and alien,” that prevent translation are the source of Valiant’s humor. He starts by noting the common challenge that speakers of Tagalog and Sundanese face when distinguishing between the consonants “p” “f” and “v,” further complicated by Arabic mispronunciation of the consonant “b.” For the rest of the book, the voice of Valiant’s Filipino supervisor Albert, who speaks to Valiant in English, is written in Indonesian, sometimes in English (as below), with this particular Tagalog speech impediment that Sundanese Indonesians from Valiant’s hometown of Bandung frequently experience themselves. Every speech act by Albert turns into sitcom-style slapstick:

* Albert is trying to say “finance” but says “binans” instead. Binan is Indonesian slang for “gay.”
** Valiant has slipped the speech impediment into his narrative voice.
*** Note that the first two lines combined, and the third line, are each less than 140 characters.

In another scene, Valiant awakes from a nightmare in which he explains it was the first dream he had in the Arabic language, but with English subtitles: “Yes, I saw English text on the screen of my dream!” (p.371, my translation) Valiant wrote all of the dialogue and description of the dream in Indonesian, so the reader is receiving the complete transcript of Valiant’s dream, translated twice (first into English then into Indonesian) from a language (Arabic) that Valiant himself does not understand!

In my favorite “translation” sequence on pages 307-309, a customer walks into the coffeeshop and asks Valiant to translate several text messages written in Indonesian. They were sent by an Indonesian woman working as a domestic laborer in Saudi Arabia, and apparently in a romantic relationship with the customer because Valiant realizes that she has been sending him lyrics from her favorite popular Indonesian dangdut love songs. The customer shows Valiant four different text messages, and with embarrassment and exasperation, Valiant provides the translations in awkward English:

Valiant lies when he is asked to translate an Indonesian text message for another customer:

I haven’t even touched the “overpowering and alien” scenes (from an Indonesian perspective) of Arabian sexuality, alternating between deep repression on the one hand and hyper-perversion on the other. Then there are scenes of conspicuous Arabian wealth wielded by people with unparalleled combinations of stupidity and arrogance. The realities of extreme discrimination faced by foreign labor in Saudi Arabia, particularly by women working as housemaids, are touched upon as well. Finally, there are many scenes of religious hypocrisy, the likes of which are sadly becoming more common here in Indonesia. Valiant recounts all of these scenes based on either his personal experience or the experiences of the Indonesian friends he met there. Apart from the hundreds of laugh-out-loud moments (the LOLZ or wkwkwkwkwkz depending on your slang preference), these stories reveal some of what lies beneath the Kingdom’s carefully managed public image as the Muslim world’s pious caretaker of Mecca and Medina and global supplier of oil. For Indonesians, Valiant’s book surely makes them proud and grateful of their home country and then think twice about the so-called “arabization” of Indonesian Islam. (Hundreds of appreciative Indonesian reader reactions can be found on Twitter by searching the hashtag #kedai1001mimpi)

My critique: Valiant’s book presents dozens of short vignettes, loosely tied together by the chronological arc (arrival, culture shock, acclimation, outrage, revenge, escape) of his time spent in Dammam, Saudi Arabia. I recognized quite a few of the stories from his Arabian Underkampret series on Twitter. Here is what I learned: it’s not easy to jump genre from serial tweets (or even blog posts) to long form narrative. Serial tweets impose a strict rhythm (140 characters or less) on internet communications. The #hashtag, which @vabyo uses as much more than just a topic or category marker in his tweets, is an important part of that rhythm. @Vabyo uses hashtags as a reflexive counterpoint to his stories, moments when the narrator comments upon his own storytelling, with brilliant comedic effect. Furthermore, each episode was an event with dozens if not hundreds of @vabyo’s followers reading along in real time, anticipating and savoring the arrival of the story’s next sentence every few minutes. Readers could reply in real time, sometimes asking for more details and receiving @vabyo’s answers. The temporal and prosodic qualities of Arabian Underkampret are not easily transposed into prose. First, the hashtag method of reflexive self-comment disappears, losing some of the delightful cognitive dissonance that they offer. Second, @vabyo’s efficiently descriptive, alliterative, rhyming tweets become oddly overwhelming after Valiant links and revises them as sentences on the page. Third, Valiant loses track here and there of certain promising narrative threads introduced in one or two vignettes, but without follow-up. For example, we never found out why coffeeshop customers from Riyadh are extra-arrogant compared to average-arrogant Saudi customers in Dammam. We also never find out if Valiant ever took up Eldo’s offer to try private pole dancing for paying Saudi customers. I wonder if @vabyo would answer that question if I asked him on Twitter?